The European Commission has launched infringement proceedings against the UK, it announced in a statement on Thursday (Nov. 14th), accusing the country of "breaching its EU Treaty obligations by not suggesting a candidate for the post of EU Commissioner."

Prime Minister Boris Johnson has refused to appoint a candidate for the post, arguing that he was not in a position to do so in view of the upcoming general election on December 12th.

However, Johnson stated as long ago as July, during his first speech to parliament as prime minister, that he would “under no circumstances” nominate a new European commissioner.

“We will not nominate a UK Commissioner for the new Commission taking office on 1st December – under no circumstances – though clearly this is not intended to stop the EU appointing a new Commission”, he told the House of Commons

According to the EU treaties, each member state has an obligation to nominate a commission member.

"The UK authorities have until Friday 22nd November at the latest to provide their views. This short time period is justified by the fact that the next Commission must enter into office as soon as possible," the Commission said.

We have launched an infringement procedure against the #UK

for failing to name a candidate for EU Commissioner #Brexit 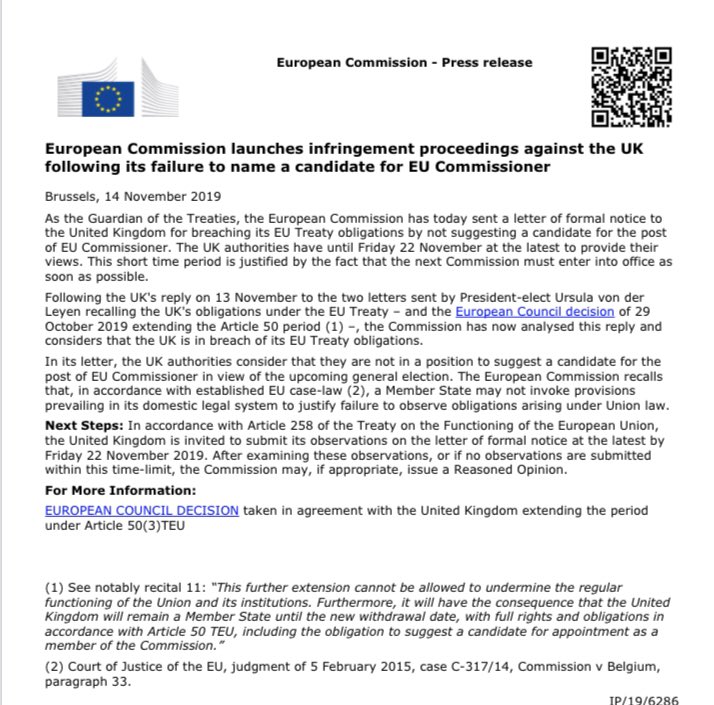 MEPs had initially blocked three nominees for von Der Leyen's team, pushing back the date she hoped her Commission would take over, from November 1st to December 1st.

While those from France and Romania have now been cleared, the Hungarian Commissioner-designate, Oliver Varhelyi has yet to receive the green light after MEPs "voiced serious concerns over how Mr Várhelyi will be capable of promoting the rule of law and fundamental rights in the enlargement countries, given that his own country, Hungary, has passed several laws in clear breach of the EU Treaties over the last few years. Others expressed their worry over whether the Commissioner-designate’s loyalty will lie with the Hungarian government or with the EU as a whole".

Sassoli: "It seems as though the lessons of history are being forgotten."

For a strong investment prospect, look no further than Georgia’s telecommunications sector

Fight against corruption: France must do better in terms of the executive and law enforcement agencies

EU can only deliver for people if the economy works well

Iran can defuse crisis by sticking to nuclear deal

Shooting Down Ukrainian Flight PS572: What Do We Need To Know?

The downing of Ukrainian Airlines Flight PS752: Putin's hands at play yet again?

"EU will not be rushed" in post-Brexit negotiations, says Irish Foreign Minister Coveney

USA refuses to extradite killer of Harry Dunn to UK