In Brandenburg, the AfD were expected to finish close behind the centre-left Social Democratic Party (SPD).

The setbacks for the ruling parties were not as major as feared.

The AfD benefited from discontent over Germany's refugee policies and the planned closure of coal mines in the former communist states.

In Saxony, the CDU saw its share of the vote drop by 7.4 points from the 2014 election to 32%, with the AfD coming second, according to preliminary results.

In Brandenburg, which surrounds Berlin, the SPD - which has run the state since German reunification in 1990 - won 27.2% of the vote with the AfD on 22.9%, preliminary numbers showed.

"We're satisfied in Brandenburg as well as in Saxony," AfD co-leader Alexander Gauland said, adding that his party had "punished" Mrs Merkel's conservatives. 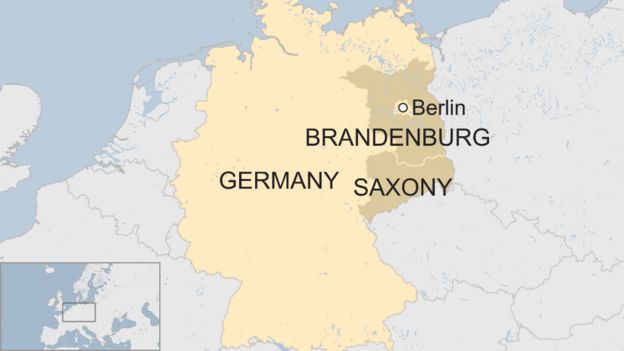 But despite the gains, the result may disappoint the AfD as the party had hoped to win most votes in Brandenburg, the BBC's Damien McGuinness reports from Berlin.

The numbers will be greeted with relief by the both the CDU and the SPD, partners in Mrs Merkel's national government, our correspondent adds.

The coalition is due to last until federal elections in 2021, and a collapse could trigger a snap election or result in a minority government.