As we enter the homestretch of the parliamentary campaign in Ukraine, with elections to be held on Sunday, one of the biggest surveys conducted in the country this year showed that the new Ukrainian parliament would consist of the following political parties: “Sluga Narodu” Party led by Dmytro Razumkov and backed by the newly elected President of Ukraine Volodymyr Zelenskiy (41,2%), “Opposition Platform – Za Zhittya” led by Yuriy Boyko, Vadim Rabinovich, and Viktor Medvedchuk (18.6%), the “European Solidarnist” Party of the former President of Ukraine Petro Poroshenko (11.1%), and the “Batkivschyna” Party of Yulia Tymoshenko (7.1%).

The other parties do not have sufficient public support to win the elections though two of them stand on the brink of entering the parliament: “Gromadyanska Pozitsiya” of Anatoliy Grytsenko and Dmytro Dobrodomov – 4.6%, “Golos” led by the singer Svyatoslav Vakarchuk – 4.4%, “Syla I Chest” of Ihor Smeshko – 3.1%, the Radical Party of Oleg Lyashko – 2.0%, “Opposition Bloc” of Eugeniy Muraev, Oleksandr Vilkul and Gennadiy Kernes – 1.9%, the “Svoboda” Party of Oleg Tyagnybok, Andriy Biletskiy and Dmytro Yarosh – 1.7%, The Shariy Party – 1.4%, the Agrarian Party of Mykhaylo Poplavskiy – 1.1%, “The Ukrainian Strategy Of Groisman” led by Ukraine’s prime-minister Volodymyr Groisman – 1.0%.

The results of the survey are shown in the tables below. 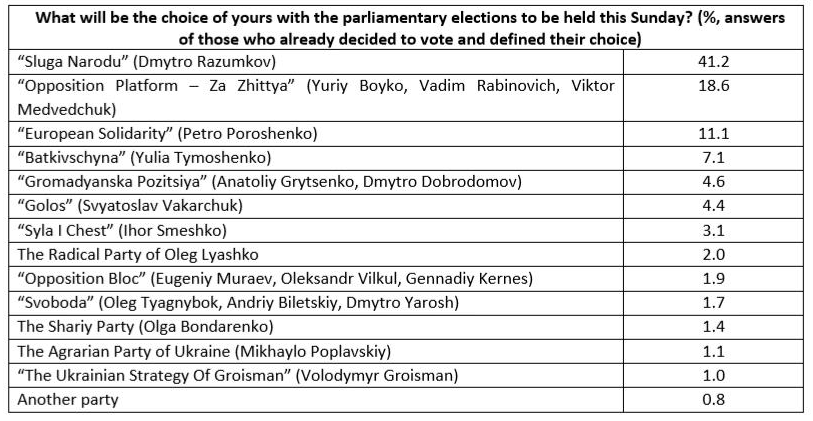 On the eve of the parliamentary elections fluctuations of “Sluga Narodu” figures came to a standstill allowing the party to stop the gradual decrease of its rating though public support of the party remains substantially lower compared to that shown by Volodymyr Zelenskiy in the course of presidential elections.

“Opposition Platform – Za Zhittya” led by Yuriy Boyko, Vadim Rabinovich, and Viktor Medvedchuk remains the only big party notable for stable augmentation of public support. On the eve of elections the party enjoyed abrupt upswing of its rating, possibly caused by a series of widely discussed events – liberation of prisoners, gas talks, etc.

“European Solidarity” also managed to stabilize its rating and achieve distinctive growth in its figures on the very eve of elections. This growth may possibly result from effective regional tours of its leaders.

“Batkivschyna” consolidated its grip on the figures that guarantee its presence in the next parliament, which possibly stemmed from the rumors about its leader to be the next prime minister of Ukraine.

“Gromadyanska Pozitsiya”, “Golos” and “Syla I Chest” seem to lose their struggle to enter the parliament, which in case of “Syla I Chest” Party of Ihor Smeshko was also accompanied with considerable drop of its rating, compared to the figures registered one and two months ago.

Joe Biden "concerned about China's actions" in the Pacific region

Joe Biden "concerned about China's actions" in the Pacific region

Ukraine: "We will give up nothing of what is ours," says Volodymyr Zelensky

Archive recording of the WPSU Jazz Show as broadcast on August 5, 2022, hosted by Rana Glick.

Defending European values and interests is "a matter of life and death," argue Ian Bond and Luigi Scazzieri

Cities of businesses: mapping out a completely new world

UK will fall into recession this year, warns Bank of England