Russia and Ukraine have traditionally been considered nations where religious factors play a significant role not only in the spiritual life, but also in economics and politics. For more than 300 years the Russian Orthodox Church has subordinated the Kyiv Metropolia, previously subordinate to Constantinople. For about 100 years, Ukrainians have fought for religious independence from Moscow.

While Ukraine was part of Soviet Russia, this independence seemed like nothing more than a “utopia for day-dreamers”. However, after the collapse of the USSR, this dream became closer to reality. The first attempt to get an autocephaly from Russian Church was made by Ukrainian clergy in 1991, but it ended up in collapse, removal of its leader Metropolitan Filaret from the leadership of Ukrainian Church, and the subsequent church schism. The Russians were simply psychologically unprepared to accept the independence of Ukraine as a state, and the independence of the church would be a psychological shock for many of them, as long as Ukraine has always been considered part of Russia, and Ukrainians were regarded as part of “the Russian people”.

But it's not just psychology that matters. Russian church was rightly considered (and still is considered) as an institution that is capable of keeping Ukrainians in the zone of influence of the Kremlin. For this reason, the ideology of the “Russian world” was developed – political in essence, religious in terms of vocabulary. For example, the “Russian world” ideology was presented for Orthodox believers as “prophecies of the Russian elders (startsy)”. Many church books and brochures were sold, describing the “great future for Russia and perdition to those who reject the possibility of such future”.

Largely it was due to this propaganda, that the war began in Donbas in 2014. Many Russian Church priests (including members of Ukrainian Orthodox Church) became chaplains in detachments of the pro-Russian separatists. Here is what priest Andrei Semenov (Lugansk) said at the ceremony of consecrating the battle banner of the regiment of the “people's militia of the LPR”: “Russian soldiers and military leaders have always been strong in faith. It is the faith that will lead you to triumph over the enemy. ” Another priest in Chuginka town, Luhansk region, harboured subversive groups of pro-Russian militants in his church, which was also used as an arsenal for their weapons and ammunition. Moreover Russian priests continuously blessed volunteers to go to the Donbas "to beat the fascist scum."

Since the 2014 events in Ukraine were represented by Russian propaganda as a coup d'état which brought to power “junta” and nationalists, some church leaders blessed both Russians and Donbas residents to fight “the hated junta and Bandera nationalists”. Moscow Patriarchate priests are still taking oaths from pro-Russian militants in their temples in the occupied Donbas, organising church services with the militants, assuring their believers that their enemies in Donbas are “waging war against God, and helping Satan rush to power”. 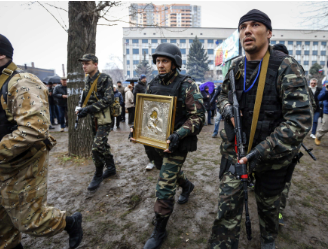 Russian priests openly supported the annexation of the Crimea. There was a detective story at all about Russian church involvement into the annexation. At the beginning of 2014 (during the active phase of the Maidan) a shrine - “The Gifts of the Magi” – was brought from Greece to Russia for believers to worship. Suddenly, the church authorities of the Russian Church changed the route of this shrine and brought it to the Crimea. Igor Strelkov (Girkin) arrived among the guards of the relic. A few months later he led a militant detachment that captured the city of Slavyansk, Donetsk Region. In his interviews, Strelkov repeatedly told that he was strongly supported by the monks of Svyatogorsk Lavra (Donetsk region). During the arrival of the relics in Sevastopol, negotiations were held between a major Russian businessman and church patron Konstantin Malofeev, Russian State Duma deputy Dmitry Sablin and the pro-Russian [but for that moment still] Ukrainian leadership of the Crimea to support Russia in annexing the peninsula. Moreover, one of the Russian churches in Kerch served as a transit point for the Russian occupation forces.

One can still find a lot of such information available in open interviews, articles, videos on YouTube, etc. Ukrainian church journalist, co-founder of the Cerkvarium Internet project, Tatiana Derkach wrote a book “Moscow Patriarchate in Ukraine: the anatomy of betrayal” based on such information. In her book she mentions: “Ukraine had to pass the most unexpected test. When the priests, whom the people trusted their souls, rushed to consecrate the checkpoints of the separatists, became confessors of terrorist battalions, took oaths from the invaders "to loyalty to the Fatherland". Hiding behind the freedom of religion, Russian Church has for many years contributed to the shaking of the constitutional order in Ukraine.

Of course, Russian Church publicly denies its support to hybrid war waged by Russia against Ukraine. In Russian churches priests and believers pray for peace, for an "end to the fratricidal war." However, this war is still called civil, the occupation by Russia is not recognized, and the priests in the occupied territories continue their close cooperation with puppet pro-Russian government. In the west of Ukraine there have been cases of agitation of the priests of the Moscow Patriarchate against military drafts to the Ukrainian army - “for religious reasons”.

And recently the Church of Constantinople announced its decision to support the autocephaly of the Ukrainian Church. Of course, Russia could not accept this loss. As a result, a large-scale hysteria rolled through the Russian media, controlled by the Kremlin, threatening “that blood will begin to flow in Ukraine because of the division of church property”. Ukrainian believers in the jurisdiction of the Moscow Patriarchate began to prepare for desperate resistance to such imaginary attempts "for the true faith and shrines." The propagandists promised “the first bloodshed” already on October 14, but the Ukrainian authorities managed to prevent all possible provocations in the streets.

The last open question remains: what will happen to church property belonging to religious communities? Indeed, according to preliminary statistics, more than half of such communities volunteered to transfer into the recently announced autocephalous Ukrainian church. But conflicts over temples are possible. This means that Moscow will in every possible way provoke its supporters to the most radical actions. Moreover, believers of the Moscow Patriarchate in Ukraine are convinced that the authorities will force them to push into the autocephalous Church. The goal of Russia is the same: to prove that the new Ukrainian Church “is built on blood”, meanwhile spreading accusations of violating the rights of believers and persecutions on the basis of religion, though the religion is one – Orthodox Christianity.

However, this kind of confrontation is pretty much undesirable to Ukraine. Due to this, the Ukrainian authorities made a promise that there would be no pressure on believers concerning the choice of church jurisdiction. For instance, Rostislav Pavlenko, former deputy head of the Presidential Administration of Ukraine, announced that the right of believers to remain in the jurisdiction of the Moscow Patriarchate will be protected by the state: “No one will prevent them from freely practicing their faith, freely expressing their views, as well as others, and provocations against them will be stopped just as resolutely as any actions to confront the autocephaly”. Moreover President of Ukraine Petro Poroshenko assured that the state will not interfere in church affairs, but will protect the rights of all believers, those who want to go to the autocephalous church and those who want to stay with Moscow.